What’s New in OmniFocus 2.7 for iOS

OmniFocus 2.7 for iOS is a significant update that takes advantage of new features in iOS 9 and watchOS 2. This video introduces the major new features that are available on all iOS devices, such as the ability to search your OmniFocus database using Spotlight, as well as new functionality that is only available on the iPad, specifically Slide Over and Split View. Slide Over requires at least an iPad Air or an iPad mini 2 and you’ll need at least an iPad Air 2, iPad mini 4 or iPad Pro to take advantage of Split View. 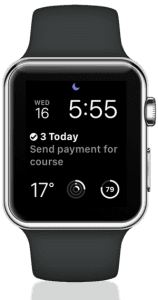 This release also includes a new version of the OmniFocus for Apple Watch app, that has been completely rewritten to take advantage of significant new functionality that was introduced in watchOS 2. The first thing you’ll likely notice is that OmniFocus for Apple Watch is much faster. It’s now a native watch app, so it doesn’t need to constantly communicate with your iPhone. To help ensure that you don’t forget about OmniFocus as you go through the day, you can now display OmniFocus on watch faces using large or small complications.

Watch this video and learn how to:

Previous Tutorial
Customizing the Layout in OmniFocus for Mac
Next Tutorial
Using OmniFocus with Fantastical 2 for Mac
This website uses cookies to improve your experience. If you continue to use this site, you agree with it.